Here are the 1968 Chiefs, "between Super Bowls". Having lost Super Bowl I, they would go on to win Super Bowl IV following the 1969 season.
I only had Hayes, McClinton, and Bell in 1968. All others were found at card shows a few years ago. 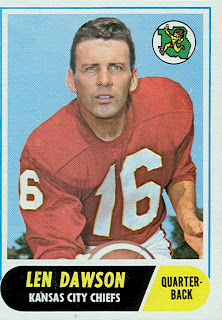 #171 Len Dawson - Dawson was drafted by the Steelers in 1957. After 3 seasons with the Steelers and 2 with the Browns, he joined the Dallas Texans (who would later become the Chiefs) in 1963 and immediately became the starting QB, a job he would hold until his retirement following the 1975 season. Dawson led the AFL in passing in 1962, 1964, and 1966. Len was one of 2 QBs let go by the Pittsburgh Steelers in the late 1950s (the other was Johnny Unitas!) 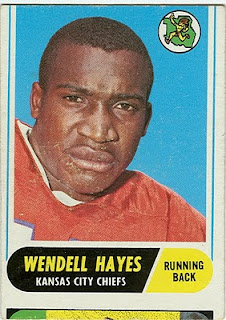 #40 Wendell Hayes - This card is so off-center that you can see part of the Raiders' Clem Daniels' card. As a rookie in 1965, Hayes was the Denver Broncos leading rusher. He's wearing a Broncos jersey here (the numbers have a blue outline). 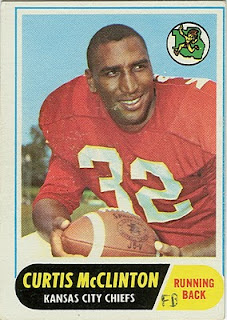 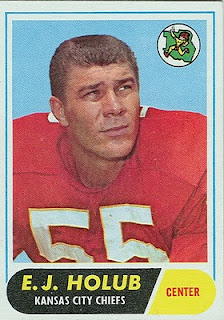 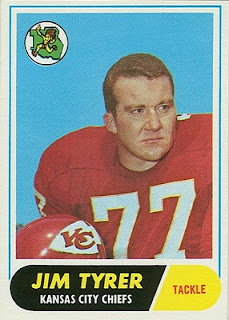 #15 Jim Tyrer - Tyrer was a rookie in 1961, and was an AFL all-star selection every season. What is with that logo? Maybe it's an outline of Kansas City. 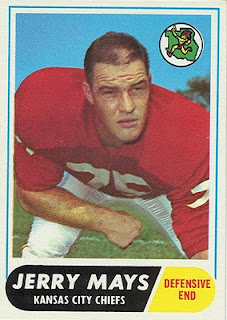 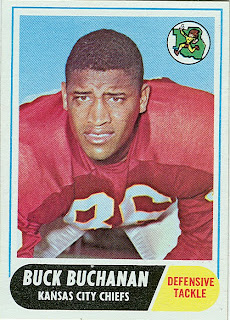 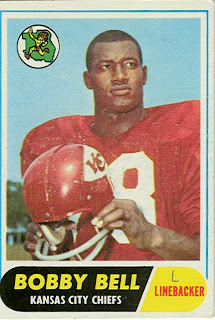 
Since the cards on my 1967 football blog were only made for NFL teams, I'm going to offset that by posting all the AFL teams on this 1968 blog, before any other NFL teams.

Next: Oakland Raiders
.
Posted by Jim from Downingtown at 11:35 AM 2 comments:

Here are the world champion Green Bay Packers. In the 1968 card set, the cards for Super Bowl participants Packers and Raiders are horizontal, and have a special background. The cards for all the other teams are vertical, without a super-imposed background.

There are 9 Packers in this set. Topps seems to have gone overboard with the running backs (3) at the expense of having no offensive or defensive linemen represented. 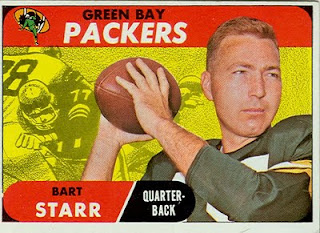 #1 Bart Starr - I guess at this time Bart was the top player in the NFL. He had just been named as MVP for both Super Bowls I & II, and now Topps has bestowed card #1 status on him! 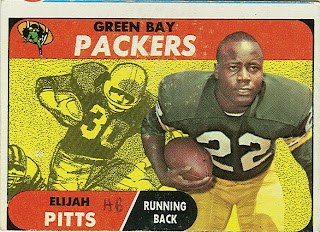 #79 Elijah Pitts - In 1967, halfbacks Elijah Pitts and Donny Anderson were tied for the team lead in rushing touchdowns with 6. Pitts is a holdover from the pre-super bowl days when Paul Hornung and Jim Taylor ruled the backfield for the Packers. Both of those backs were lost to the Saints in the 1967 expansion draft. This was of little consequence, as they were both up in years, and the Packers had youngsters Donny Anderson and Jim Grabowski to replace them. (Notice that back in the day, I had a tendency to pencil in a more specific position for some players.) 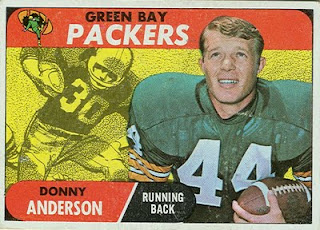 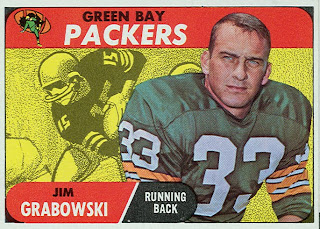 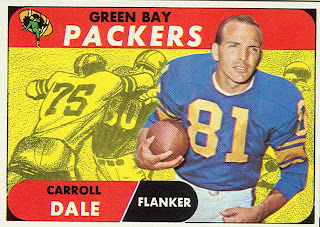 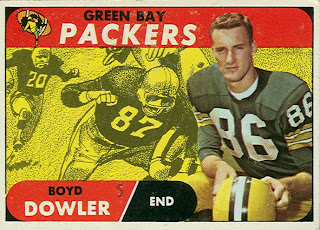 #105 Boyd Dowler - Dowler was the Packers' long-time split end. He was the rookie of the year in 1959, and led the Packers in receiving 7 times since then. You may recall (from watching the NFL Films Super Bowl I highlights, shown every January on ESPN) that Dowler's early-game injury in Super Bowl I paved the way for his replacement (Max McGee) to have a career day. 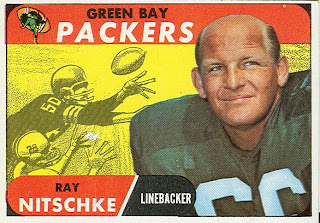 #157 Ray Nitschke - The Packers' middle linebacker was one tough, mean SOB. (I think that's a compliment, when referring to middle linebackers!) Outside of Dick Butkus, there was no better MLB during this era. Nitschke later appeared in the movie The Longest Yard, as a prison guard/middle linebacker who had a rough game against Burt Reynolds! 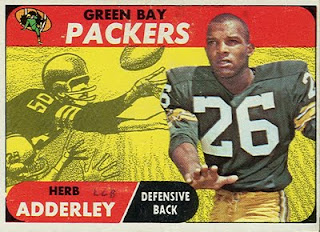 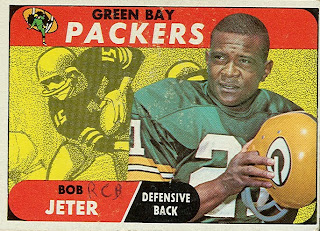 #52 Bob Jeter - The back of this card tells us that Bob played in the Canadian Football League in 1961 and 1962, before joining the Packers in 1963. Normally the starting right cornerback, Jeter was also used as a backup receiver. 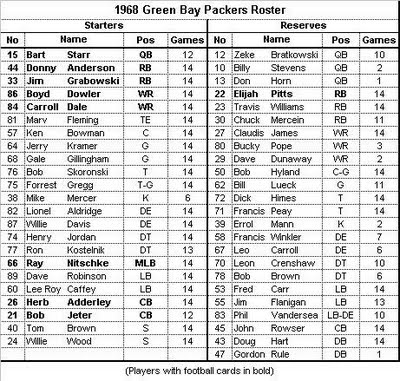 Next time: Kansas City Chiefs
.
Posted by Jim from Downingtown at 12:27 AM No comments:

Welcome to my 1968 football card blog!

In 1968, Topps re-acquired the license to print NFL football cards that they had prior to 1964, but had lost to the Philadelphia Gum Company. (From 1964 to 1967, Topps only printed AFL cards.)

Prior to 1972 less than a dozen players from each team were featured on football cards, and the cards were issued in 2 series.

The 1968 card set consisted of 217 player cards and 2 checklists. Unlike the Philadelphia Gum sets from 1964-67, there were no team cards or other "special" cards. Also unlike the Philly sets, the players were not grouped by team, but were distributed randomly across the set, like Topps baseball cards always were. There are 8 or 9 player cards per team.

This is the first year for Cincinnati Bengals cards. Since they were an expansion team, their players are all wearing their previous team's uniforms. Also, since this is Topps' first crack at NFL players in 5 years, many of the cards in the 1st series use photos that are several years old, showing players in uniforms they hadn't worn for some time.

Each post will include all the players for one team. I will not be scanning the card backs, but in this introductory post, I am including a sample 1st series back (green printing), and a 2nd series back (blue printing). Some cards have a football highlight on the back, and some have a coin-rub quiz. Both of these types are found in each of the 2 series. 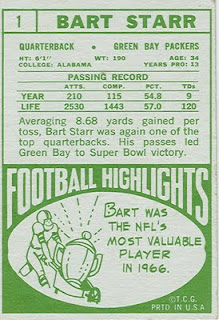 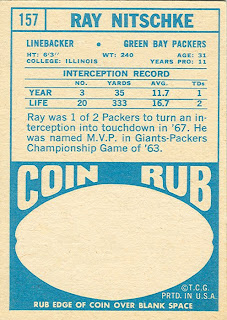 Also, 20 of the cards have backs that are parts of a picture puzzle (10 for Bart Starr, 10 for Len Dawson).


First up: The Green Bay Packers, fresh off their Super Bowl II victory over the Raiders!
.
Posted by Jim from Downingtown at 11:15 PM No comments: