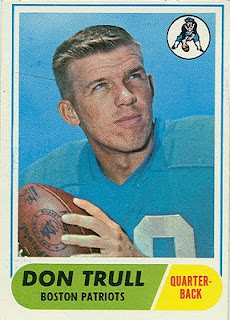 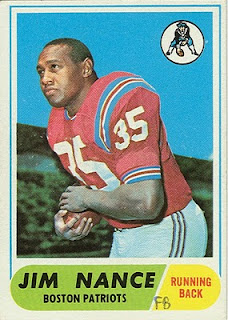 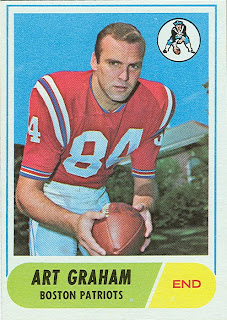 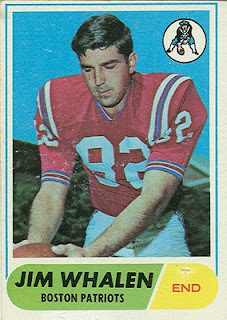 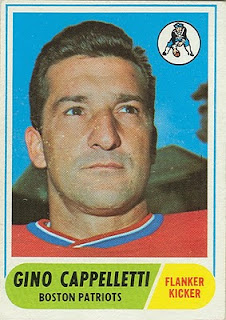 #98 Gino Cappelletti - Ahh, the good olde days, when kickers actually did something else to earn their pay between kicks. As a rookie in 1960, Gino was the Patriots' kicker and starting right cornerback, snaring 4 interceptions. From 1961 to 1967, he kicked and was a starting split end or flanker, averaging 40 catches per season. After 1967, he began phasing out his receiving duties, having 13 receptions in 1968 and 1 in 1969. He retired after the 1970 season.

#124 Nick Buoniconti - Nick was drafted by the Patriots in 1962, and immediately became their starting middle linebacker. After 7 seasons in Boston, he escaped to bigger and better things in 1969 with the Miami Dolphins. He was the Dolphins' starting middle linebacker for 6 seasons, appearing in 3 Super Bowls. Buoniconti missed the 1975 season, and finished his career in 1976 with the Dolphins as a backup. An 8-time Pro Bowler, he was inducted into the Hall of Fame in 2001. 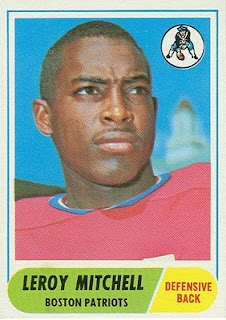 #45 Leroy Mitchell - Mitchell was the Patriots' 11th-round pick in 1967. For 2 seasons, he started every game at left cornerback. After missing the 1969 season, he played for the Houston Oilers in 1970. He was the Denver Broncos' starting left cornerback for his last 3 seasons (1971-73). 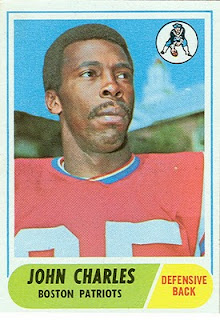 #202 John Charles - Charles was the Patriots' 1st-round pick in 1967. As a rookie he was the starting right cornerback, before moving to strong safety for 1968 and 1969. John played for the Vikings in 1970, before moving to the Houston Oilers for his final 4 seasons.

Here are the 1968 Miami Dolphins. Aside from Bob Griese, they are not a very impressive bunch. By the time coach Don Shula whipped this team into Super Bowl shape three years later, only Griese and Howard Twilley would remain from this group.

Odd that there's no running backs included, but all 3 starting receivers are here. These were Griese's targets in the early years, before veteran ends Paul Warfield and Marv Fleming were brought in. Also no linemen cards, but 2 defensive backs?

Back in the day, I only had Jack Clancy and Dick Westmoreland. 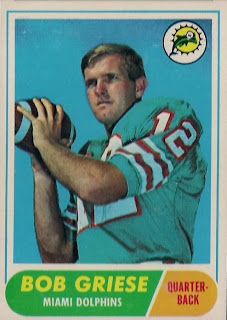 #196 Bob Griese - Griese was the Dolphins' #1 pick (4th overall) in the 1967 draft. He played his entire career (1967-80) with Miami, and was the starter in all but his final season. Bob played in 3 straight Super Bowls (1971-73), winning the last 2. Although the Dolphins went 17-0 in the 1972 season, Griese only started 5 of those regular season games, due to injuries. Backup QB Earl Morrall (who also played in Super Bowl III with the Colts) started 9 games in 1972. Griese was an 8-time Pro Bowler, and was inducted into the Hall of Fame in 1990. (This is one of the two 1968 cards I don't have. The picture is not sharp because it's a cropped image of a card mounted in plexiglass.) 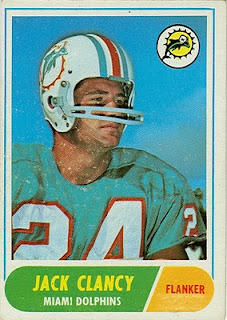 #14 Jack Clancy - Jack was the Dolphins' flanker in his rookie season of 1967 and in 1969. He missed the 1968 season altogether. In 1970, Paul Warfield joined the team, so the Dolphins lowered the boom on Clancy. He finished his career in 1970 with the Packers. 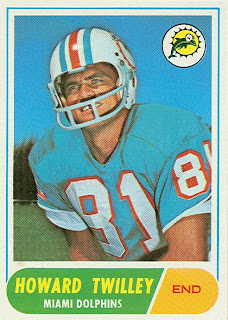 #39 Howard Twilley - Although this card indicates Twilley was a split end, the Pro-Football-Reference.com website lists him as the flanker. After pairing with Jack Clancy or Karl Noonan for several seasons, Twilley had the good fortune of playing across from Paul Warfield in the early 1970s. 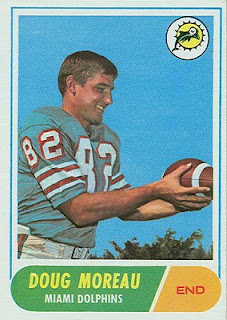 #144 Doug Moreau - Moreau went from spending his rookie season (1966) on the taxi squad, to the starting tight end job in 1967 and 1968. In 1969, he lost his starting job to Larry Seiple, who in turn would lose his TE job in 1970 when big Marv Fleming was brought in from Green Bay. Moreau finished his pro career in 1969 with the Dolphins. 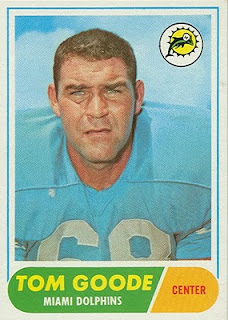 #92 Tom Goode - Tom played 4 seasons with the Houston Oilers before coming to the Dolphins in the 1965 expansion draft. (With the Oilers, he played both center and linebacker.) He was the Dolphins' starting center for 4 seasons, before finishing up his career in 1970 with the Colts. He was the long-snapper for the last-second winning field goal in Super Bowl V against the Cowboys. 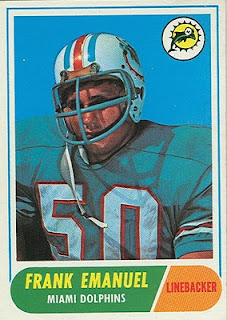 #170 Frank Emanuel - Frank was the Dolphins' #2 pick in 1966, and was their starting middle linebacker for his first 3 seasons. What happened after that? Well, the Dolphins acquired Nick Buoniconti from the Patriots, and Emanuel found a job with Miami's special teams for one more season, before going to the Saints in 1970 where he ended his career. 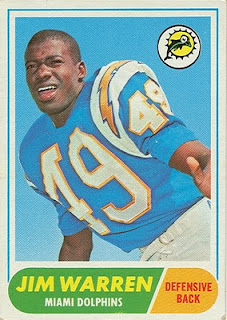 #66 Jimmy Warren - After 2 seasons with the Chargers, Warren was the Dolphins' starting left cornerback for 4 seasons (1966-69). Beginning in 1970, he spent 6 seasons as a backup with the Oakland Raiders' goon squad. defensive backs. 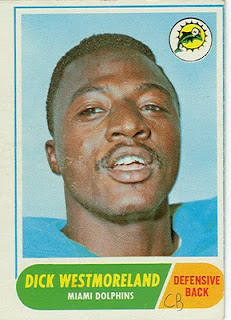 #118 Dick Westmoreland - Like Jimmy Warren, Westmoreland started out with the San Diego Chargers. After 3 seasons with the Chargers, he became the Dolphins' starting right cornerback for 3 seasons (1966-68), before losing his job in 1969 to rookie Lloyd Mumphord. Westmoreland's last season was 1969.


Next time: Boston Patriots
.
Posted by Jim from Downingtown at 1:01 PM 6 comments: