Hey, the Jets are 1 win away from the Super Bowl. When was the last time that happened?

Here are the 1968 New York Jets... on their way to Super Bowl III. We have 3 receivers, 2 linebackers, and no linemen. (Back in the day, I only had the Joe Namath and Cornell Gordon cards.) 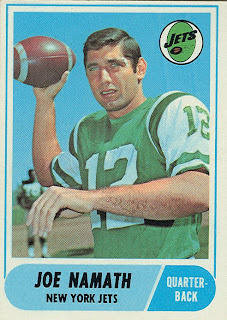 #65 Joe Namath - Joe promised a victory in Super Bowl III - and delivered. He was the AFL rookie of the year in 1965, and played high school football in western Pennsylvania (as did Johnny Unitas, Joe Montana, and Tony Dorsett). 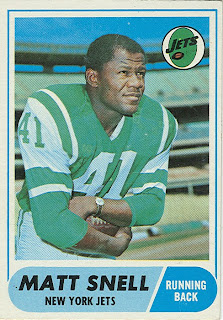 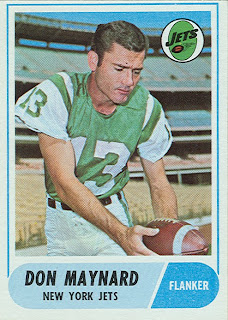 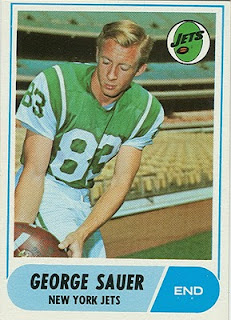 #13 George Sauer - The Jets' split end had a short (1965-70) but productive career as Namath's favorite target. He retired after the 1970 season, because of the violent nature of the game. 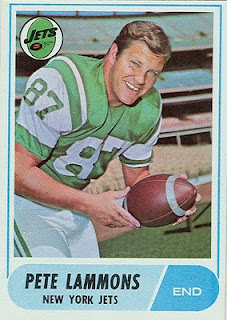 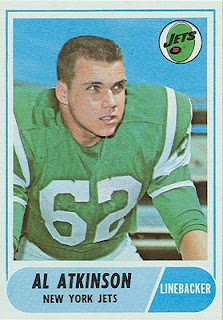 #195 Al Atkinson - Al was the Jets' middle linebacker from 1965 to 1974. He played for the same suburban-Philadelphia high school as John Cappelletti, then went to nearby Villanova. 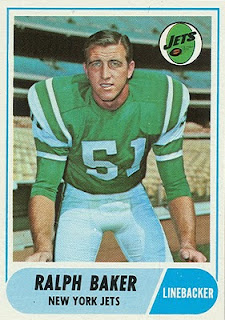 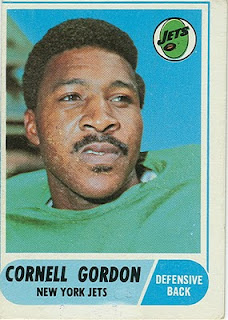 #91 Cornell Gordon - A rookie in 1965, this cornerback played 5 seasons with the Jets, and 3 with the Broncos.

Here are the 1968 Oakland Raiders - the defending AFL champions.

The Raiders and the NFL champion Packers have a different card style than all the other teams. (Compare to the Chiefs' cards posted earlier.) There are only 8 cards for the Raiders this year. I got the Daryle Lamonica, George Blanda, and Fred Biletnikoff cards (all in the 2nd series) a few years ago. All the other cards are from the first series, which I've had since 1968. 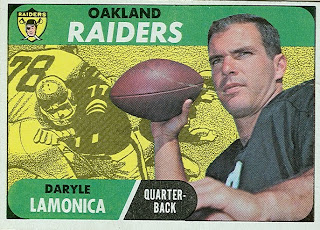 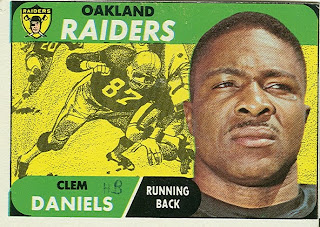 #90 Clem Daniels - This halfback was the AFL's MVP in 1963, leading the league in rushing with 1099 yards. After a rookie season with the Dallas Texans in 1960, he spent the next 7 seasons as the Raiders' halfback, and wrapped up his career in 1968 with the 49ers. 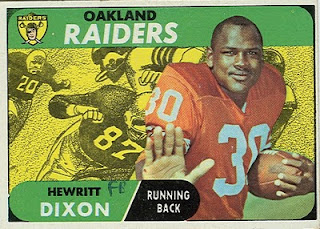 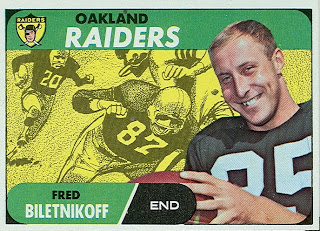 #168 Fred Biletnikoff - Fred spent his entire career (1965-78) as a wide receiver for the Raiders. In the late 1960s, he (along with Lance Alworth, Don Maynard, and Otis Taylor) was one the top receivers in the AFL. (The back of this card is part of the Bart Starr puzzle.) 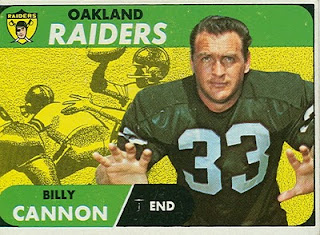 #37 Billy Cannon - Cannon was the first overall pick in the 1960 NFL draft. Rather than sign with the Rams, he signed with the AFL's Houston Oilers. This was one of the first skirmishes between the 2 leagues. After 4 seasons as the Oilers' halfback, Cannon moved on to the Raiders, where he switched to tight end in his 2nd season. In 1970, he played with the Chiefs before retiring. 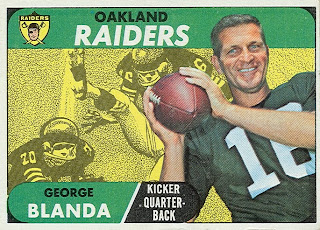 #142 George Blanda - It seems like Blanda played forever. After quarterbacking the Bears for much of the 1950s, he found new life as the Houston Oilers' quarterback during the early AFL years. After moving to Oakland, he was primarily their kicker, but played occasionally at QB. 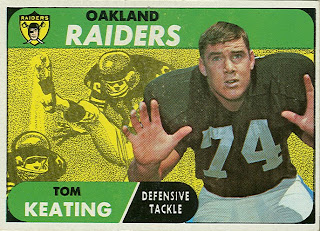 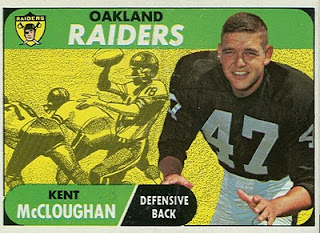