Here are the remaining 6 cards in the 1968 Eagles set produced by RetroCards.

Lane Howell was the Eagles’ left offensive tackle from 1965-69. He was a backup with the Giants for 2 seasons, then acquired in a trade for guard Pete Case. 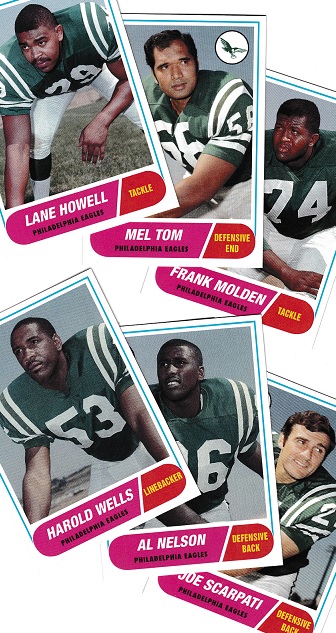 Harold Wells played four years (1965-68), all with the Eagles. He played in every game, and started every game at right linebacker from 1966-68. He never had a Topps or Philly Gum card.

Except for missing all but 1 game in 1967 due to injury, Al Nelson was a starting cornerback for the Eagles from his rookie season of 1965 until midway through his final 1973 season, when he was replaced by John Outlaw. He played left corner every year but 1970.

Joe Scarpati was the Eagles’ free safety from 1964 to 1969, playing every game but two during his rookie year. He was traded to the Saints in 1970, where he started 10 games and was the holder for Tom Dempsey’s record 63-yard field goal. Joe returned to the Eagles in 1971 but was injured in training camp.
Posted by Jim from Downingtown at 2:44 PM No comments:

In the last post, we looked at the 1968 Eagles in the Topps regular issue set. Like with most teams, there were 8 cards.

A few years ago, I stumbled upon the website for RetroCards, a company that makes (mostly football) cards in the design of sets from the 1950s to 1970s. They seem to focus mainly on Cowboys sets, but there are many sets for the Packers and Bears, as well as for some other teams (and all teams in 1963 and 1966).

There are usually between 15 and 24 cards per team set (depending on photo availability I guess). The card fronts match the original sets almost exactly, while the backs are mostly the same except for a company logo.

In the past few years I bought the 1966 Eagles, 1967 Cowboys and Packers, 1968 Packers, 1971 Cowboys, some assorted 1966 cards, and the 5-card Vince Papale set. The only discrepancy I have found among those sets is that the blue border on the 1971 cards is lighter than the original Topps cards.

This month I bought the 1968 Eagles set, and it just arrived. I am going to show these cards in two posts, for the sole reason that Blogger limits the labels to a combined length of 200 characters. This post has 12 offensive players. The next post will have the 5 defensive players, and OT Lane Howell. (If I thought ahead, I could have included Randy Beisler with the defensive group instead, since he played DT in 1968.)

What I like about this set:
1. Eighteen more 1968 Eagles cards. Yeah!
2. The only cards made for Chuck Hughes, Harry Jones, Larry Conjar, Frank Molden, and Harold Wells.
3. The only Eagles card for Randy Beisler, and the only card of Mel Tom wearing #58 (he later switched to #99).

What I don't like:
1. The card backs are gray with red printing, making them hard to read. (The original backs were bright white with green or blue printing.)
2. No Ben Hawkins card. He was a starting WR from 1966-72, and had just led the NFL with 1265 receiving yards in 1967. It's hard to believe a photo of him wearing the 1966-69 jersey was not available.
3. Other 1968 starters left out of the Topps and RetroCards combined set are center Gene Ceppetelli, guards Dick Hart and Mark Nordquist, DE Tim Rossovich, DT Gary Pettigrew, and cornerback Alvin Haymond.

I'm not sure why Timmy Brown was included, since he was traded to the Colts in January 1968. Also, it’s odd that little-used backups Jones, Conjar and Ron Goodwin were included while the above-mentioned starters were not. I guess it was photo availability.

King Hill is back for one more season as the Eagles' #2 quarterback.

As mentioned, Timmy Brown was traded to the Colts in January 1968 for cornerback Alvin Haymond. He was the Birds' starting halfback for a number of years, but was slowed by injuries in 1967.

Izzy Lang took over the starting halfback chores from Brown, and manned that spot in '68 and '69. 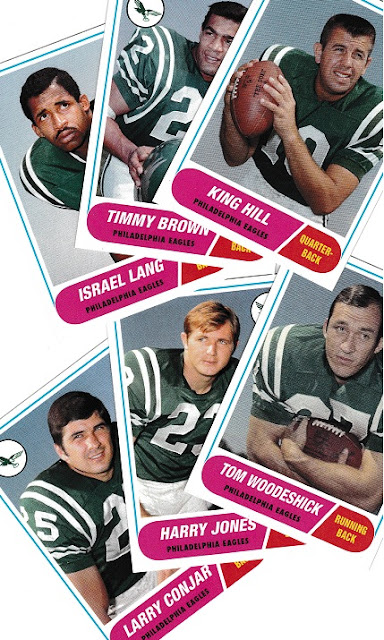 Tom Woodeshick was a backup for several seasons, then started at fullback from 1967-69.

Chuck Hughes was a backup wide receiver from 1967-69, before playing for the Lions in ’70 and ’71. I commend RetroCards for (no doubt) resisting the urge to include a note on the back about his in-game death in 1971.

Ron Goodwin was the starting flanker from 1963-66, then lost his job to Ben Hawkins, but stuck around as a backup for 2 more seasons. 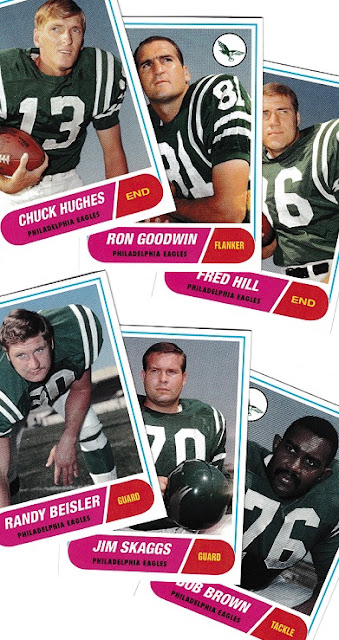 Randy Beisler was the team's 1st-round pick in 1966, and started half the games in each of his 3 seasons with the Eagles. In 1968, those games were at defensive tackle. After the 1968 season, he was traded to the 49ers for backup quarterback George Mira. (This makes NO sense! Trade your former #1 pick for a little-used backup QB? And not a very good one at that? Meanwhile, Beisler played in EVERY game for the Niners from 1969 to 1973, and started all but one game from 1970-72, while Mira was gone after one season.)

Jim Skaggs was the Eagles' starting right guard for much of 1965-70, but missed the entire 1968 season due to injury.

Bob Brown was the Eagles' starting right tackle from 1964-68, making 3 Pro Bowls during that time. He made three more with the Rams and Raiders, on his way to the Hall of Fame in 2004.

Part 2 is here
Posted by Jim from Downingtown at 8:00 AM 1 comment:

As promised (although more than a year late) the winners of Super Bowl LII – The Philadelphia Eagles. Here is the 1968 edition, about as far from a Super Bowl champion as you can get.

The Eagles started off the 1968 season by losing their first 11 games (by a combined score of 310-144). I don't think tanking was a thing back then, like it is in the NBA now. (The Philadelphia 76ers intentionally tanked 3 consecutive seasons, and still managed to screw it up – drafting a series of players with known injury histories. Only Joel Embid remains as a tanking prize, and he can’t stay in the lineup for extended periods. But I digress.)

The Eagles could have stayed the course with their unintentional tanking, by making it all about “playing the youngsters to see what we have to build for the future”, but noooo, they had to go and win 2 of their final 3 games, thus blowing their chance for the #1 overall draft pick in 1969 (O.J. Simpson).

Instead they settled for the 3rd pick, and chose Leroy Keyes, a running back from Purdue. Even THAT was a screw-up, as the Steelers selected Joe Greene with the very next pick. Keyes had 2 poor seasons as a running back, followed by 2 less-than-serviceable seasons as a strong safety before they finally cut him loose.


1968 was the first year Topps issued cards for NFL players since 1963, so their first series cards have old photographs for the NFL players (and presumably newer photos for AFL players). In the 2nd series, new photos are seen. 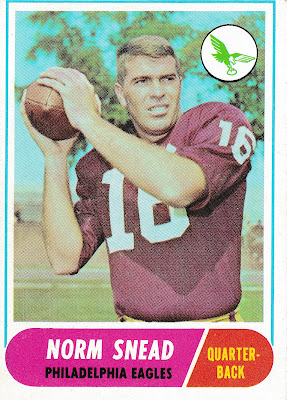 Norm Snead was the team's quarterback from 1964-1970, acquired from the Redskins in a questionable deal for Sonny Jurgensen. 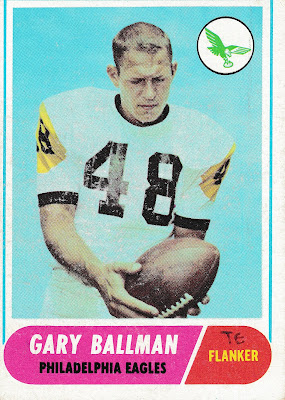 Gary Ballman was acquired from the Steelers just before the 1967 season for fullback Earl Gros and guard Bruce Van Dyke. He was a starting wide receiver in '67 and '68, and the starting tight end from 1969-71. 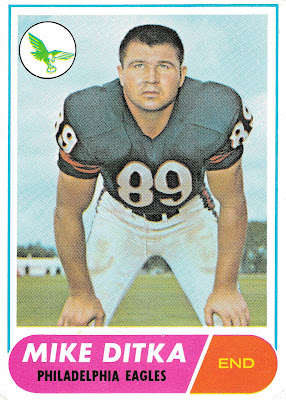 Mike Ditka was also acquired just before the 1967 season, from the Bears for 3rd-string QB Jack Concannon. He was the starter in 1967, but spent most of 1968 either injured or suspended for his skirmishes with the coaching staff. Ditka was traded to the Cowboys before the 1969 season. 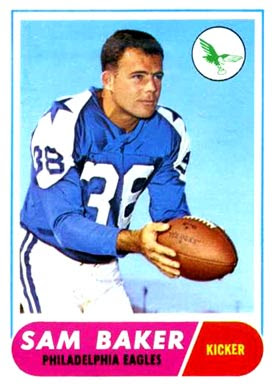 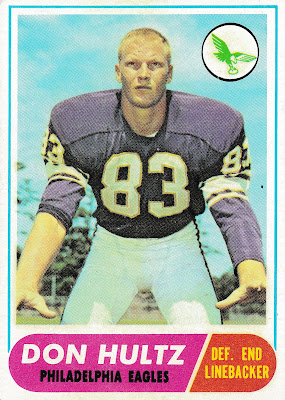 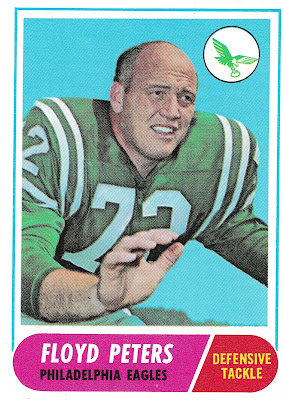 After a few seasons with the Browns and Lions, Floyd Peters was the Eagles' starting left tackle from 1964-69, though missing part of 1968 with injuries. He made 3 Pro Bowls while an Eagle. Peters ended his career with the Redskins in 1970. 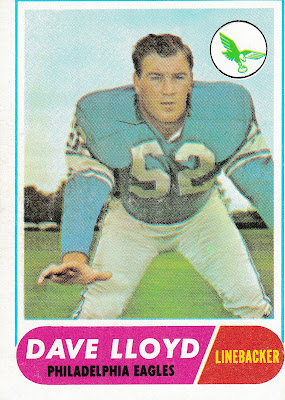 Like Peters, Dave Lloyd also played for the Browns and Lions before becoming an Eagle in 1963. He was the team's starting middle linebacker from 1963-69, and for the first 5 games of 1970 before he was replaced by Tim Rossovich. Dave made the Pro Bowl in his final full season (1969). 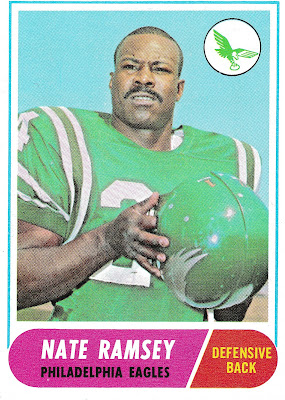