Here are the 1968 Denver Broncos cards. Most NFL teams seemed to have 9 cards, while the AFL teams had 8 cards. Aside from Floyd Little, there's not much here to write home about. I had 5 of these cards back in 1968 (3 of which apparently I found necessary to redefine their positions), acquired Bob Scarpitto and Nemiah Wilson in the 1980s, and just got Floyd Little this year.

The Broncos were one of the perennially lousy AFL teams, losing at least 10 games in 6 of their first 8 seasons. They didn't have a winning record until 1973 (7-5-2). 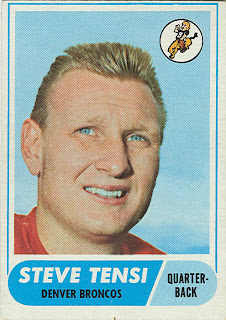 #69 Steve Tensi - It seems that the Broncos' lack of success in their early years was due to not having a good quarterback. While other AFL teams had Len Dawson, Daryle Lamonica, Jack Kemp, Joe Namath, Bob Griese, and John Hadl, the Broncos employed the likes of Frank Tripucka, Mickey Slaughter, Jacky Lee, John McCormick, Max Choboian, Steve Tensi, Marlin Briscoe, Pete Liske, and Steve Ramsey. Not until 1972 would they have a "good" QB (Charley Johnson). Hmmm... I haven't really talked about Steve Tensi yet. 'Nuff said. 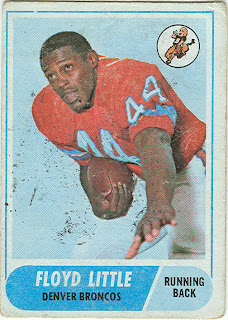 #173 Floyd Little - This is by far the worst conditioned of all my football cards. I just picked it up (in "good" status) earlier this year as a place-holder, since it was one of the last 3 cards I needed for the set. Floyd Little was one of the best running backs in the AFL. Floyd was the Broncos' #1 pick in 1967, and was their starting halfback for his entire career (1967-75). He played in 5 Pro Bowls and was inducted into the Hall of Fame in 2010. 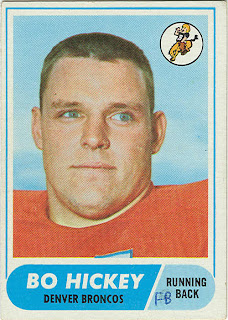 #17 Bo Hickey - Does Bo know football? It would appear not, since his entire career consisted of 12 games for the 1967 Broncos. 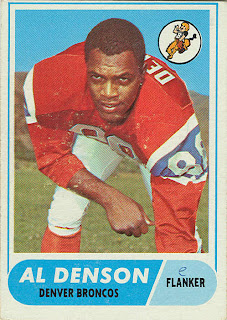 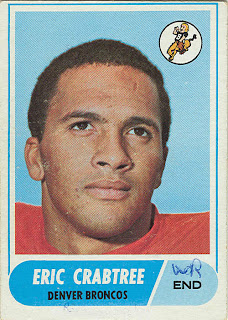 #95 Eric Crabtree - Eric was drafted in 1966 by the Broncos and the Colts. He played for Denver from 1966-68, the last 2 seasons as a starting wide receiver. He was one of the Cincinnati Bengals' starting receivers from 1969 to midway through the 1971 season. He finished out the 1971 season with the Patriots. 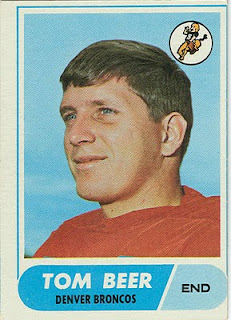 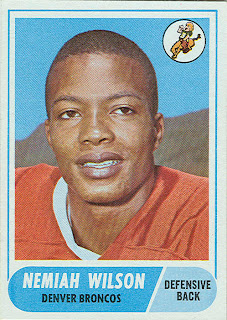 #199 Nemiah Wilson - Wilson played for the Broncos from 1965-67, the last 2 seasons as their starting right cornerback. He was traded to the Raiders prior to the 1968 season, and was a starting cornerback there from 1969 to 1973. He played 2 more seasons with Oakland as a backup cornerback. 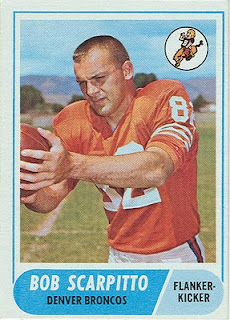 This post wraps up the 10 AFL teams. Next time: Baltimore Colts
.
Posted by Jim from Downingtown at 10:20 PM 3 comments: