Early last year, I asked John over at the "Cards That Never Were" blog to make some custom cards in the style of the 1967, 1968, and 1971 football sets - the only football sets that I have completed (well, except for the '68 Johnny Unitas and Bob Griese cards). I gave him a list of starting quarterbacks that Topps or Philly Gum had omitted from their sets.

(Another time, I asked him to add additional Green Bay Packers to the 1967 set, but he said that being a Chicago Bears fan, that would not be possible - LOL.)


The Steelers and Bengals were both missing QB cards in the 1968 set. Bill Nelsen had just been traded to the Browns, giving 2 QB cards for Cleveland, and none for Pittsburgh. The Bengals were an expansion team in 1968, and had no QB card - probably because they didn't select any quarterbacks in the expansion draft. Although ex-Dolphin John Stofa was the primary QB in their inaugural season, Sam Wyche also saw some playing time. 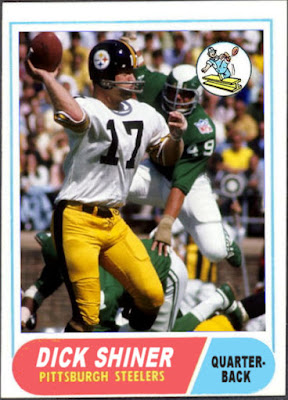 Dick Shiner was drafted by the Redskins in 1964, and spent 3 seasons backing up Sonny Jurgensen (i.e. - no playing time), before riding out the 1967 season on the Browns' bench. His only seasons as a starter came in 1968 and 1969 for the Steelers. Pittsburgh drafted Terry Bradshaw in 1970, (and Terry Hanratty in 1969), so Shiner's services were no longer required in the Steel City. He spent 1970-74 bouncing around with the Giants, Falcons, and Patriots. 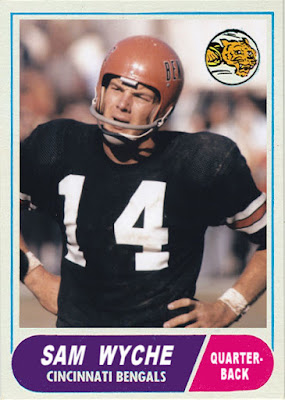 Although I don't have a 1969 blog, I have a handful of 1969 cards and asked John to fill in the missing QBs there as well. Jack Kemp missed the entire 1968 season with a knee injury, and was left out of the 1969 set. In fact, there was no Bills' QB in that set. For the 2nd-year Bengals, Topps included John Stofa (in a Dolphins' jersey and helmet), but Stofa had returned to the Dolphins in 1969. Their starting QB in '69 was rookie sensation Greg Cook. 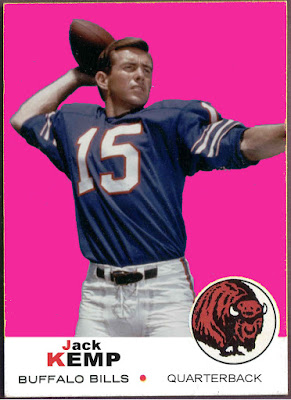 Jack Kemp was drafted by the Lions in 1957, and was cut by the Steelers later that season. (The Steelers also cut Johnny Unitas and Len Dawson in the late 1950s!) When the AFL started in 1960, Kemp was the Chargers' starting QB in 1960 and 1961. Injured for part of 1962, he was traded to the Bills during that season. 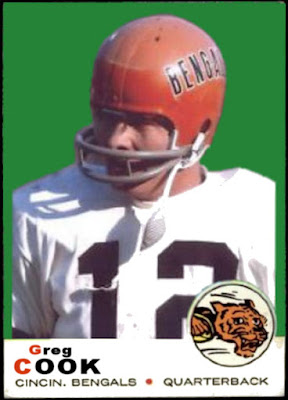 Greg Cook was the Bengals' #1 pick in 1969 (the 5th overall pick in the "O.J. Simpson draft"). He was a hometown favorite from the University of Cincinnati, and was an immediate success - leading the AFL in completion percentage and was the league's top-rated QB, despite missing 3 early-season games with what was later discovered to be a rotator cuff injury. Because he returned to play with the injury, it did further damage and essentially ended his career after 1 season. Cook passed away in 2012 at age 65.

Upon the recent death of Doug Buffone, John also made Buffone cards that were missing from the Topps sets. Here are two of them: 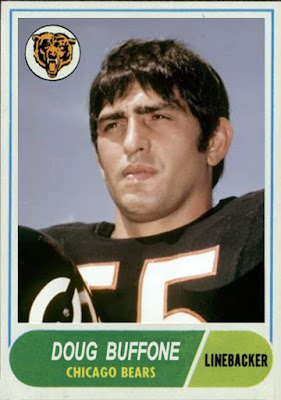 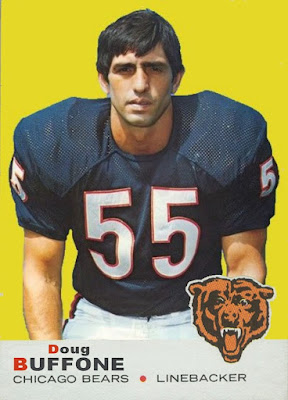